The Travel Agency album is relatively well-known amongst '60s guys, including those who aren't "psych" collectors; nonetheless, I'm ecstatic to read that my slow posting of the Travel Agency tracks to YouTube has triggered several people to get excited enough about this rip to pick up original copies themselves. Despite this not being a truly psychedelic album -- rather, it leans towards the pop-rock side of the spectrum -- it still maintains a wide appeal due to the catchy songwriting, addictive fuzz, and heady cover artwork. I mean, it's hard to see an album cover like this and not get interested.

Many thanks to M.S. for his top contributions to this post!  :) 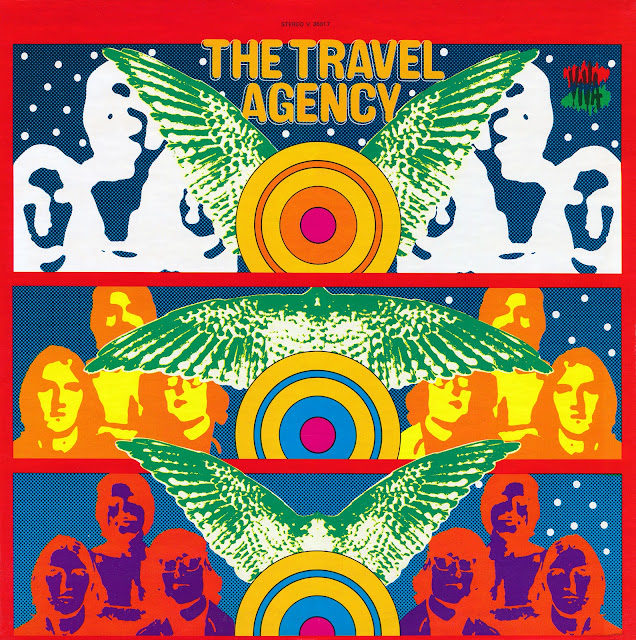 It was hard for me to chose a single song below to help you preview this post, since there are a few great contenders. The album starts off with the excellent "What's A Man," an anti-war political question whose organ-and-sound-effects-based introduction more closely resembles the '70s German krautrock scene than anything from California, where this group actually hailed from. This track has been compared by some listeners to Nirvana's "Smells Like Teen Spirit," though to my ears only the guitar tone is somewhat similar between the two. Despite the fact that the second half of the song does not really match with its haunting prelude, this track is still a good précis of the band's style, flaunting basic vocal harmonies, laid-back guitar fuzz, and a cyclic, almost Revolver-esque drum+bass style.

The fan-favorite on this album may in fact be the straight-ahead chugger "Cadillac George," a simple feel-good tune with meaningless words and a funky rhythm track that demands restless foot tapping. It is immediately followed by the smoothly flowing "Lonely Seabird," which is perhaps the group's one true claim to psychedelia. Listening to this song I am transported to a foggy day in Golden Gate Park, the salty air reverberating with sounds of some psychedelic band playing in the distance while all the hippies get stoned and dance around with flowers in their hair.

Nothing on side two really stands out to me as much as those three tracks, though "She Understands" -- which was chosen to be the B-side for the album's single -- is probably the effort which comes closest. The lyrics on this album range from great ("What's A Man") to cringe-worthy ("You Will Be There") and everywhere in between. The only song which, to steal a phrase from Brent Marley, really came across as "life-guiding" for me was "Sorry You Were Born," a surprisingly mature track about discovering your meaning in life, and encouraging you to pursue that path. And it's sung in plain English; there's no unnecessary keywords like "inner self" and "expand your mind," which probably made it sound exceptionally square in 1968, but has simultaneously allowed it to age without too much moral degradation. While copies of this album are not particularly challenging to find, unearthing one that plays mint is not trivial. The Indianapolis pressings are much noisier than the Monarch ones, the latter of which seem to be slightly more rare, but some degree of non-fill on side two seems commonplace. I first ripped this album in 2019 from a previously-sealed Monarch copy in the possession of my friend M.S., but after switching out my over-worn AT150MLx for a new VMN40ML and seeing >10dB of harmonic distortion disappear, I wanted to rip another copy to see if the inner-groove distortion on this LP would improve. Unfortunately that distortion seems to be pressed into the disc itself; still, the sound of this rip is an insane improvement over the treble-boosted, horribly noisy (and NR'd) bootleg CD on Kismet. I hope someday that a properly-remastered reissue from the master tapes will come, but in the meantime, the original pressings are still creamy and clear enough to inspire my listening.

Some nice information about the band has been written on the Rockasteria site. 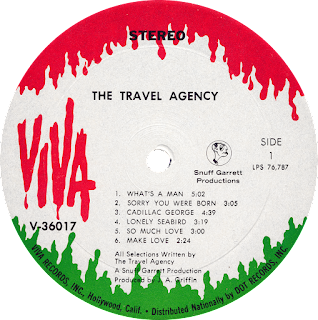 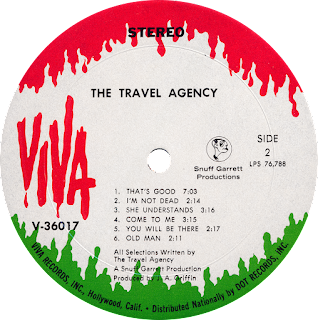 Posted by ThePoodleBites at 7:17 AM

I have been working in vinyl restoration for many years. I have done it for the love of music, not for the love of money. I have submitted masters to record labels and released digitizations that reveal the limitations of other labels' (and engineers') products. If you have a piece of vintage audio that you would like digitized, don't trust a company that could care less about their end product than they could about the recording itself. Please contact me I will happily and freely transfer any rare recordings for you. Alternatively, see the "FAQ" post here for my want list for albums I am willing to purchase and rip to share here for all. There is too much great unheard music out there to let it suffer at the hand of careless individuals with only a dollar in mind.
For those with such inquiries, you can contact me via email: thepoodlebites561 (at) gmail. Thanks, and enjoy the music!