The first Krokodil record to reach my turntable was the debut, and though I almost instantly loved it, C.F. did give me fair warning: "The Kroks get better. Swamp is twice as good as the 1st LP, and Invisible World is f*ckin' killer."

Most collectors seem to agree that this is band's strongest LP. It certainly is an evolution from the previous two; for example, while the blues harp that featured prominently on the previous albums is still here, you'll be surprised to find that it's now been run through analog delay and reverb... it's hard to classify this record's sound, as it's pretty unique; Krokodil usually gets grouped with the early-'70s "krautrock" scene -- which I'm not sure is fair, given that the band is Swiss, not German, and the (admittedly broad) electronic-based exploratory style which spans from Neu! to Kraftwerk to Can to Faust to Agitation Free, for me, doesn't seem to capture what's happening in the grooves on this tremendous psychedelic, progressive, experimental rock LP. Okay, I could see an argument for Guru Guru, but this is way better...

It goes without saying this post wouldn't have been possible without C.F. -- major thanks, man!

Psychedelic influence immediately makes its presence known: the spacey "Odyssey In Om" gives a mood not dissimilar to the Jimi Hendrix Experience's "1983"; the sound collage towards the end of "Looking At Time" reminds me of similar moments on Jefferson Airplane's After Bathing At Baxter's; and I can almost feel the grade-A Swiss Sandoz kicking in as ground begins to swell with the vocal harmonies of "With Little Miss Trimmings." I think it's fair to simultaneously call this "progressive" as well, given that two of its tracks are over 14 minutes long, but it's not at all prog like Tull or ELP or Yes. The compositions are much more tastefully heady and experimental, rather than being noodling and show-offy. Even the relatively proggy "Green Fly" (later retitled "The Morning Sun") reminds me more of The Moody Blues or Spring than of King Crimson or Pink Floyd.

The album lifts off with "Lady Of Attraction," one of the band's strongest tracks. The accompaniment is acoustic guitar and a simple mellotron bass line, but Walty Anselmo's vocal deliverance is haunting, sounding like it's been double-tracked through a Leslie. There are accents from a tabla through a phaser, a flute, and a trippy harmonica solo though the same vocal effect, which sounds like an instrument from another planet. I wonder if the lady on the cover -- complete with fangs and blood dripping out of her mouth -- is the embodiment of Walty's "trap." This eerie mood reflected in the artwork also extends to the off-color, ritualistic image that graces the gatefold.

Like the other Krok LPs, this album was reissued on CD on the Second Battle label in 1999, but unfortunately the mastering suffered extreme levels of gain and peak limiting. The difference between this master and the CD remaster is nearly 7 dB! The speed is also marginally different, and "Lady Of Attraction" has an added fade-out, whereas the original audio seamlessly streams into the second track. Luckily these original German pressings have unbelievably great sound quality, and this copy in possession of C.F. had only been spun once or twice before, originally coming from a cache of unplayed copies that turned up in Australia, of all places.

The original master tape has some static here and there, for example during the reverb-drenched flute intro to "Odyssey In Om," which seem to be from tape saturation. I did remove some non-musical clicks in other places, such as the car-screeching intro to track 2, where they really distracted from the album's gentle flow, along with carefully mitigating the 50 Hz AC hum where it was noticeably audible. I also experimented with rotating the phase to bring up the album's levels a little closer to its reissue, but I decided to leave it as-is, so that the grandiose dynamics can come through unhindered by limited headroom. The channel separation isn't quite as good as the CD, but it's damn close, and given the flatter mastering, this new digital master sounds much more natural than the old.

And so, I hope you will grab a Rivella and enjoy the band's third album as it was meant to be heard in 1971... 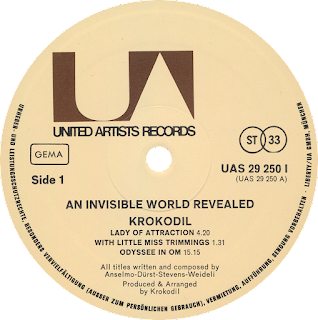 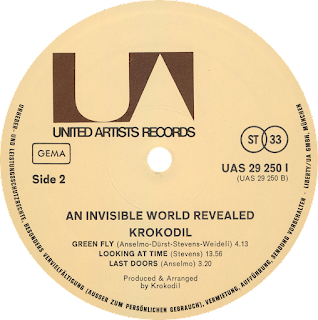 Email ThisBlogThis!Share to TwitterShare to FacebookShare to Pinterest
Labels: Krokodil

and freely transfer any rare recordings for you. Alternatively, see the "FAQ" post here for my want list for albums I am willing to purchase and rip to share here for all. There is too much great unheard music out there to let it suffer at the hand of careless individuals with only a dollar in mind.
For those with such inquiries, you can contact me via email: thepoodlebites561 (at) gmail. Thanks, and enjoy the music!