The major-label debut from the West Coast Pop Art Experimental Band (what a mouthful!) is probably one of the strongest contenders for the band's best LP output. Fittingly matching with the band's title, the album is basically a '60s pop LP comprising, yes, some experimental moments, along with the more mainstream-sounding tracks. A long-time favorite for many collectors, many of the band's most well-remembered recordings fill these grooves. The trippy painting which envelops the sleeve has undoubtedly only contributed to its allure. While not quite attaining "masterpiece" status for me, this record is certainly still a cool and unique part of California hippie-rock history and remains very enjoyable from beginning to end, even 55 years after its release.

Perhaps most importantly, the band's main detractor, the controversial lyrics of Bob Markley, seem to make little appearance here, apart from perhaps the tracks "I Won't Hurt You" and "Leiyla". But being pinched between the heavily-stoned compositions like "Shifting Sands" and "1906", and even being heavily stoned-out themselves, it's pretty hard to notice. Other highlights include the great psych-rocker "Transparent Day" and the garagey mushroom-eater "'Scuse Me, Miss Rose". The song credited solely to Dan Harris, "Will You Walk With Me", is actually a cover of the classic Bonnie Dobson track "Morning Dew", though it is so different from the Tim Rose and Grateful Dead versions that you may not recognize it at first. (Unfortunately I've heard so many versions of that song now that it's hard not to liken it to the "Louie, Louie" of psych-folk.)

A cover of Frank Zappa's "Help, I'm A Rock" is attempted as well, and although it's a nice tribute, it's still a far cry from the freakiness of the Mothers' original. Being from L.A., though, it's understandable why these guys had to try. One of the more interesting numbers is a rendition of P.F. Sloan's composition "Here's Where You Belong", which was apparently influential enough that the Grassroots also took a crack at cutting it the following year (but WCPAEB did it much better!). The album is closed out with an instrumental version of Van Dyke Parks' "High Coin", which may be more familiar to some from the Charlatans' version, later released on their LP on Philips in 1969.

The stereo mix of this album has been available on CD since Sundazed reissued it from the tapes in 2001. While not a totally perfect remaster (it is a bit too loud in some places), it is generally a quite nice-sounding CD; nonetheless, since this album was also treated to both mono and stereo variants upon initial release, many still have rightly wondered what the original album sounded like in its rarer monaural form. In 2017, Jackpot Records finally reissued the first three WCPAEB records in mono, using high-resolution transfers from the original tapes. However, for Part One, there seems to have been some problem with the analog transfer; "choppiness" of the tape noise suggests that the mono tape may have suffered some age-related degradation, or that it was simply transferred using a stereo tape head, producing two channels ever-so-slightly out-of-phase which, when collapsed to mono, caused partial cancellation of the audio during some parts of the recording. 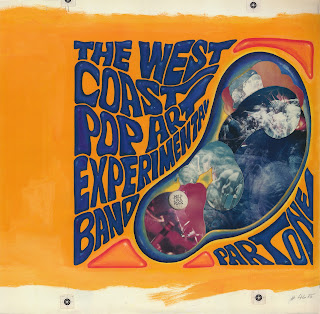 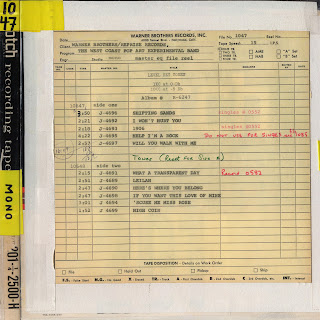 After hearing this problem on the 2017 reissue, I decided to invest in this clean original white-label promotional copy in order to share it here. I was delighted to find that the disc played flawlessly, making this one of the quickest clean-up jobs I've had for a used LP in recent memory. The sound quality is excellent as well: while there's a low-pass filter applied at about 17 kHz, this exactly matches the stereo mix and the mono Jackpot reissue, so it was apparently baked into the master itself.

After recovering from the initial shock of the wide stereo mix disappearing, I became curious about how this mix actually compared to a stereo fold-down. Indeed, while this does appear to be a dedicated mono mix, don't expect any extraordinary missing elements to suddenly appear here: from my comparisons, which I've noted below, it seems that most of that changes between the two are rather small, and were probably intended to "balance out" the sound in mono as opposed to the wide stereo version. I also noted that folding the stereo version sometimes resulted in phase cancellation issues similar to those described above, whereas the original mono LP plays perfectly with no such problems. 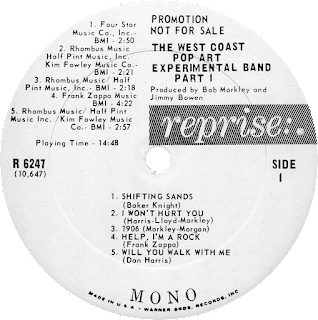 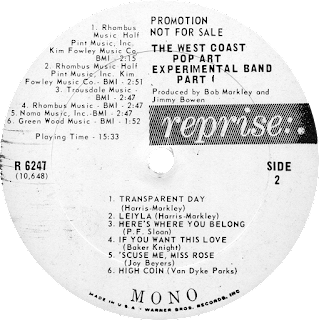 
and freely transfer any rare recordings for you. Alternatively, see the "FAQ" post here for my want list for albums I am willing to purchase and rip to share here for all. There is too much great unheard music out there to let it suffer at the hand of careless individuals with only a dollar in mind.
For those with such inquiries, you can contact me via email: thepoodlebites561 (at) gmail. Thanks, and enjoy the music!