This is a relatively new record to me. During a conversation with a collector friend, somehow the Audio Fidelity label got brought up, and I mentioned that I could never understand why The Sacred Mushroom LP on Parallax got so much attention, as I thought it was rather unexceptional blues rock through-and-through. My friend disagreed, but then mentioned that there was another noteworthy record on the label, namely Impala Syndrome, and he offered to send a copy my way to audition. I graciously accepted, and when this LP arrived, it totally blew me away. My initial impressions were that this record was somewhere between The Savage Resurrection LP and the later '60s Love records, and after more listens I'll stand by that sentiment. I'm not sure why this hasn't gotten more attention among psych heads while The Sacred Mushroom has, but today we set the record straight. Some details about the band's history are also cleared up below.

Huge thanks to CF for turning me on to and gifting me (!!!) this record after my gushing praise! 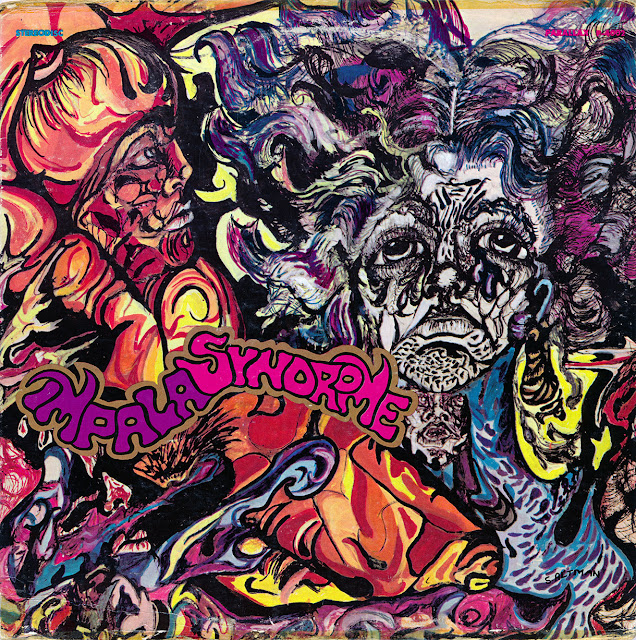 Los Impala were a semi-popular local beat group since the early 1960s, but many listeners introduced to Impala Syndrome are surprised to find that the band was local to Venezuela, yet impressively able to sing in perfect English. The band hopped international boundaries in search of success; some earlier sources state that the group eventually moved to Chicago, IL to record this album, but after tracking down the aging producer, psych enthusiasts learned this isn't the correct story:


"They moved from Venezuela to Spain circa 1966 to reach a larger (European) audience. [Impala Syndrome] was recorded in Spain. The guy at Audio Fidelity commissioned that album and produced it at a studio in Spain. The label had already had some success with Los Shakers from Uruguay, which probably sold well in Latin markets. He re-named them 'Impala Syndrome' to sound more 'hip' and his girlfriend designed the cover. They never set foot on US soil, apparently." [CF]

In fact, this is the sole album from the group where the name "Los Impala" doesn't appear at all, except for on foreign (non-US) copies. However, this information reveals that the band never opted for that name, so they should still be referred to as "Los Impala" for historical accuracy. 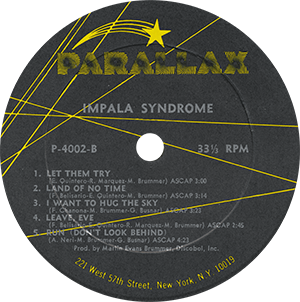 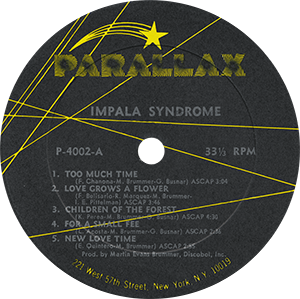 The sound of the record is very much what one would expect for a blues-based psych record from around '68-'69. It starts off with my favorite track, the burning "Too Much Time." When the raw sound of that chorus came in, I was hooked! The more heady tracks include "Love Grows A Flower," "Land Of No Time," the fuzz-drenched "Leave, Eve," and the Eastern-drone-influenced, mesmerizing "Run (Don't Look Behind)." There's not a single bad track here, really, though some moments are more conducive to headbanging than others. Other reviewers seem to unanimously recommend "I Want To Hug The Sky," though after conversing with a fellow head we both agreed that that was really the lowest point here.

The copy of this record I was given has a cover in rather poor condition, but I've included scans anyways, since it still appears to look better than any of the other images floating around online. Luckily the disc seems to have rarely been played, if ever, and sounds phenomenal. I compared this to The Savage Resurrection album before, but the sound quality here is far better than on that record. This has been booted on CD a couple times, with the sound ruined in the usual ways; the digital master I present here is vastly superior to any previous digital sources. I think I have attained a very nice master tape clarity here through the usual manual restoration procedure, and since tapes are thought to be indefinitely lost, this is likely the best this album will ever sound.

To me this record is much better than 99% of the other over-hyped obscure records out there, and is definitely worth investigating. It's the kind of record you mention to a private-press purist, then they hurriedly look it up on YouTube before agreeing with you that it's awesome, because they're too ashamed to admit they'd never heard it and instead spent their hard-earned $$$ on a copy of some way shittier, half-assed country record or something.

Thanks for taking the time to read my posts and check out my blog. I'd greatly appreciate it if you leave a small comment below. Notes from my readers are what inspire me to keep going. Thanks!
Google Drive: https://drive.google.com/open?id=1px2_jdRR9CpaNrlFffzi6QRe8vMPgAFn
Enjoy! :)

**EDIT: Thanks to @JohnM for providing an additional image from the book A Potpourri Of Melodies And Mayhem, containing information updated since the last edition of Fuzz, Acid, & Flowers!
Posted by ThePoodleBites at 9:32 PM