I've previously shared the first two tracks here, but now I have compiled the entire collection of 3 promotional singles that The Glass Family released on Warner Bros. for the release of their great album Electric Band. This southern-California group has a few really phenomenal acid-rock groovers, two of which are included here. The two radio spots have never been shared or uploaded anywhere before, and have been totally unheard since 1969. "David's Rap" was bootlegged on the Mandala CD reissue with lots of vinyl noise & NR, but I've spent many hours applying my manual restoration procedure here to bring all tracks up to the same level of clarity. This is not a long compilation, but will serve the perfect companion to the full-length album, which as of today still must be owned on LP to be heard properly. 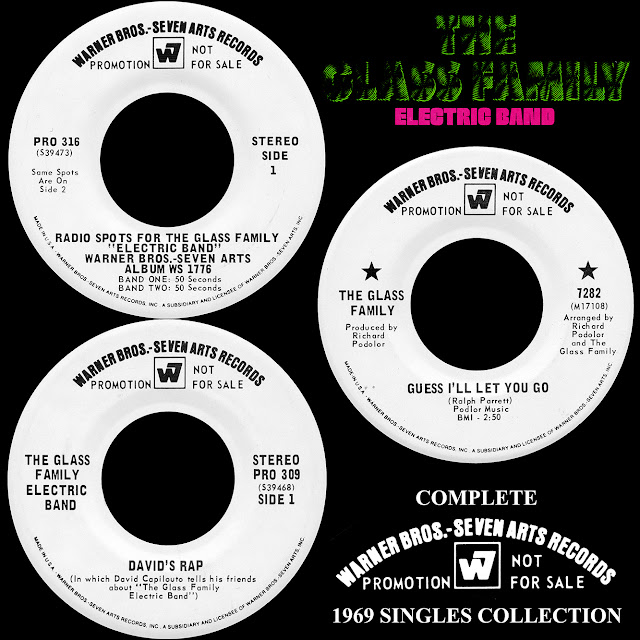 The A-side of "David's Rap" is the stereo mix of "Guess I'll Let You Go," which I've not opted to include here due to it being the same mix as available on the album. Jim Callon, who has had a long career as an engineer for Funkadelic/Parliament and then label owner / record producer after the Glass Family, has informed me that the band actually intends to release their second album this summer -- so stay tuned, and remember to support musicians for their wonderful work and entertainment!

Thanks for taking the time to read my posts and check out my blog. I'd greatly appreciate it if you leave a small comment below. Notes from my readers are what inspire me to keep going. Thanks!
Google Drive: https://drive.google.com/drive/folders/1n7ShszgXaQBgGqmt8sNMRcFYkdeX9WAb?usp=sharing
Enjoy! :)

Posted by ThePoodleBites at 4:36 PM