I am very proud to finally post this album on this blog as part of my ongoing audio projects. As you all know and have come to expect, this blog is intended to liberate such rarities in pristine sound quality from the unknown depths of history or from rare record collections. While this record has been reissued as a bootleg, no previous digital versions approach the sound quality available here. Although a very low-fi recording (and far from an audiophile pressing), the restoration I've completed for this piece of beautiful rare gold far surpassed my expectations and should represent a definitive digital version of these recordings for many, many years to come. I've also done the usual info search so you can read the album's story below.

The Electronic Hole takes a step away from The Beats' earlier work, being composed with definite song structures versus the earlier drawn-out freeform jams. Sounding much like a west-coast version of The Velvet Underground & Nico, the album has melodic motifs which point towards Relatively Clean Rivers but is much more primitive and mysterious than its cousin, with loads of fuzz, swirling organ, Phil Pearlman vocals, and even some sitar, acoustic strumming, and ballad-like moments ("Love Will Find A Way, Part I"). It's basically a droney SoCal alternative trip unique to its style, intentionally recorded to be bewildering and exciting for even the most devoted '60s enthusiast.


Big thanks to C.F. for his help with the information on this one! 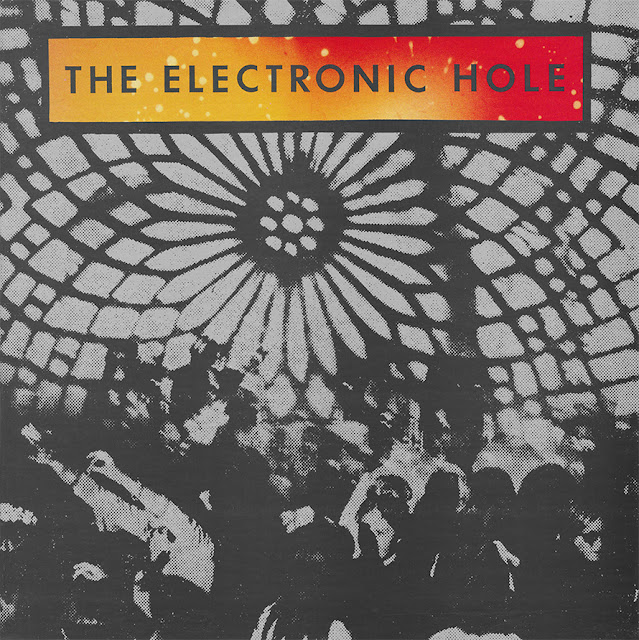 Front cover: the original Beat Of The Earth band playing a local L.A. gig, ca. 1967.
Light show done by Phil Pearlman using a doily and projector acquired
from his college days at UC Irvine, while working with The Grape Jelly Plot.

Los Angeles, CA-based coalition The Beat Of The Earth's self-titled debut, sometimes incorrectly referred to as This Record Is An Artistic Statement, had spread among psych music enthusiasts by the late 1980s. The mastermind & frontman Phil Pearlman was tracked down by collector Rich Haupt who purchased a number of copies the debut, but at the time, Pearlman strangely made no mention of any other records he had been involved in. That is until the early 1990s, when the beautiful rural psych trip Relatively Clean Rivers was discovered, and The Beat Of The Earth connection was thus uncovered -- only then did the immensely private Pearlman begin to discuss his involvement with the Rivers project.

In 1993-1994, when Our Standard Three Minute Tune was made, The Electronic Hole was still undiscovered. One could ask: how could it be that such a unique album was completely unknown to collectors for more than 25 years after its pressing? Well, coupled with its extreme rarity (less than 200 copies were ever created), The Electronic Hole wasn't ever really "released" at all. Initially recorded as a demo LP to attract new members to The Beat Of The Earth, 'The Electronic Hole' was intended to be a club in L.A. that Pearlman could use to house local musical acts. But Phil's idea was promptly shut down, and he decided to leave his demo record shelved & forgotten. 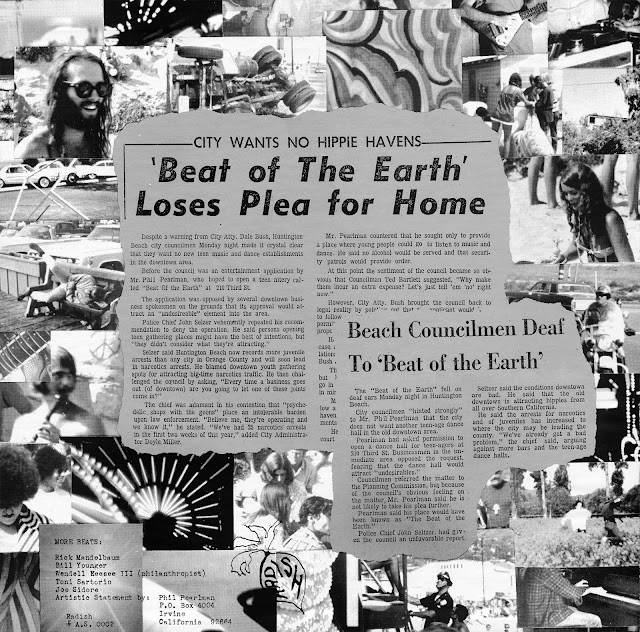 That is, until circa 1999, when Pearlman unexpectedly sent his friend a postcard that read: "Just sent you a box... Peel Slowly And See." Inside that box was The Electronic Hole, and soon the rumor that Pearlman had relinquished a completely unknown gem from his archives had spread like wildfire. Collectors everywhere, screaming "what the hell is this!?" -- the rush and amazement during the first playing of this totally unknown alt-psych trip was spectacular, and as Pearlman began to leak out ambiguous details through his few channels of outside contact, the record immediately grew in value to unbelievable figures, and of course has remained true to that reputation since.

Pearlman has stated that he felt it was futile to wait until somebody asked him about Hole, because nobody outside of a few friends and contributing musicians knew it existed at all. But why didn't he leak out any copies in 1970? And then why did he keep all those copies locked up for over two decades? Some believe that the legal gymnastics over his cover of Frank Zappa's "Trouble Comin' Every Day" (here "Love Will Find A Way, Part II") may have been an influencing factor. Others have argued that Pearlman's entire story is bogus, and that Pearlman pressed the records in the late-1990s to capitalize on the selling power his music had begun to achieve. Most genuine scholars disregard this, as anyone who's held a copy of The Electronic Hole can tell you that it's certainly old. Regardless of these questions, it is certain that The Electronic Hole is an incredible record which will only grow in appreciation as it is continually discovered & rediscovered by generations of music lovers to come. 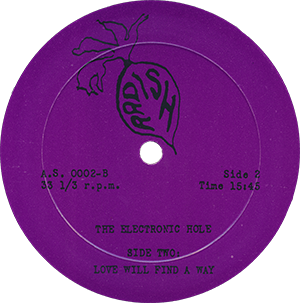 The labels of the LP are indiscriminate about track titles, simply labeling one side as "The Golden Hill" and the other as "Love Will Find A Way." While the tracks are clearly banded, no other information is given. I have split the tracks per the obvious way and labelled them as below.

Email ThisBlogThis!Share to TwitterShare to FacebookShare to Pinterest
Labels: Beat Of The Earth