This record gets a mixed rap. Some people can't stand the cacophonous free-form moments, while others praise its totally raw and unique approach to psychedelia. I can certainly understand both sides but personally am a firm supporter of the massively stoned-out dark sounds found within unquestionably one of the freakiest album covers ever. When you share a record label with the 13th Floor Elevators, though, you could do pretty much anything and get overshadowed. At any rate, hopefully the 'heads who fancy this blog will appreciate the music here, which I recommend enjoying with a freshly-rolled joint and all the lights turned off. 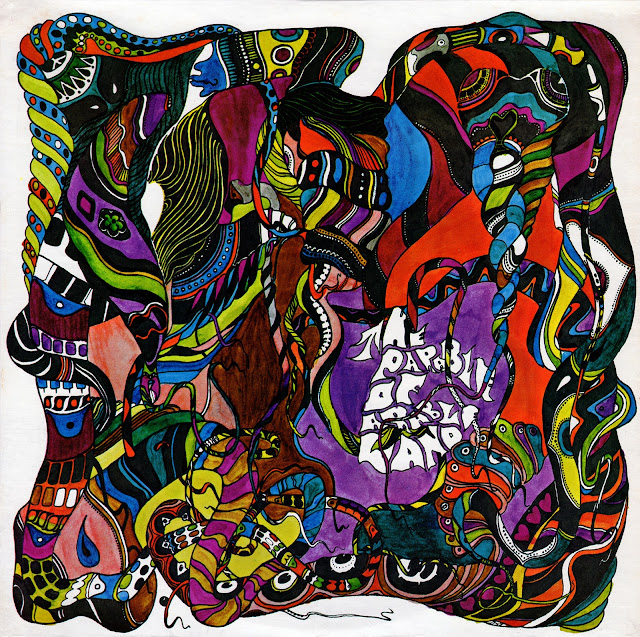 For those that know of it, this record needs no introduction. For those that don’t, it can come as a bit of a surprise. The fact that this record was released a month after Sgt. Pepper I find endlessly humorous: “… what the heck are those guys doing down in Texas?”

It is this record that really established a trend for the now-infamous International Artists label. As if inventing the genre of psychedelic rock wasn’t enough, this second album on the teal-colored label was arguably the beginning of noise rock, but still in quite a psychedelic sense. Of course, as with all the CD reissues of the 13th Floor Elevators, the Golden Dawn, Bubble Puppy, etc (on the Charly Records label), the sound quality is nothing like that of the original records, which can sell for exorbitant prices to the craziest collectors. But for some reason, this phenomenal album is somewhat overlooked today, perhaps being overshadowed by its peers. 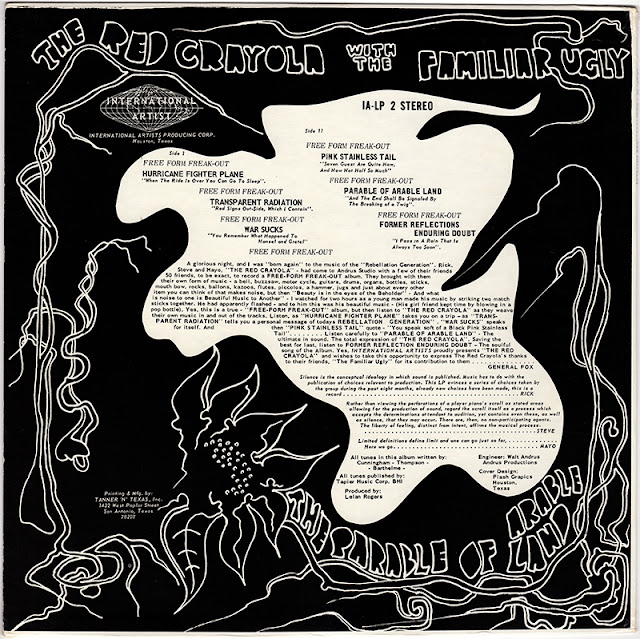 There is something extremely academic and John Cage-ian about the Red Crayola (later Krayola out of legal necessity), which is likely why Joseph Byrd (of the United States Of America) cited them as an influence. The music is beautiful but cacophonous; International Artists undoubtedly saw the “gimmick” factor of the Red Crayola, and having Roky Erickson appear here certainly contributes to the legend. It’s quite amazing that the final “Free Form Freak-Out” here, before the album’s illustrious and colorful finale, has a primary musical instrument being the motorcycle engine. That sheer juxtaposition has to be one of the greatest moments in musical history.

In terms of the mono vs. stereo mix, it is best explained by Walt Andrus as quoted in Paul Drummond’s book Eye Mind: "Well, unfortunately I made the master in mono, and the stereo version I did by doing what we called 'miracle sound' where you make a copy of it and flange and get it a little out of phase, swoosh it around some."

Upon listening, it’s clear that that’s not the entire story, but is true; the “Free Form Freak-Out” sessions are all clearly sourced from the mono mix, although with modifications (added sounds, reverberation, tape flips/reversals, speed fluctuations); the beginnings of all non-Freak-Out tracks also appear to be mono-sourced, but then cut into what appears to be full stereo mixes. To call this “fake stereo” would be completely incorrect; the mono mix was made plain, and then extra Red-Crayola-esque-ness was added to heighten the final product. Whether that goal was accomplished or not, is up to the listener; but I am yet to find a version of this record that I personally enjoy as much as this freaky stereo. 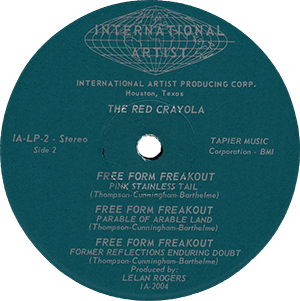 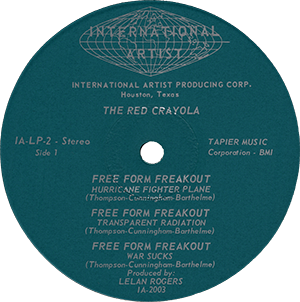 I originally transferred this album awhile back from a worn-out copy that was heavily scratched. Earlier this year I sold that copy for a pretty penny and bought this M- copy for a penny three times as pretty. Rips of the mono mix are available, which is also a necessary version, although I actually prefer the stereo, I think. But, unfortunately the Sonic Boom remaster is hot trash! (Who decided that fool needed to be behind the board?) I spent many, many hours manually de-clicking and fixing occasional tape drop-outs so you can listen to this record in pristine quality, as usual. 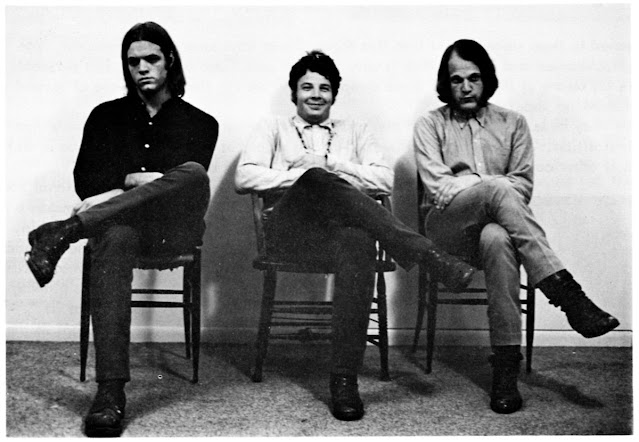 Posted by ThePoodleBites at 2:23 PM

and freely transfer any rare recordings for you. Alternatively, see the "FAQ" post here for my want list for albums I am willing to purchase and rip to share here for all. There is too much great unheard music out there to let it suffer at the hand of careless individuals with only a dollar in mind.
For those with such inquiries, you can contact me via email: thepoodlebites561 (at) gmail. Thanks, and enjoy the music!