Before the band was renamed to "Tripsichord Music Box" by San Francisco producer Matthew Katz, Tripsichord was previously known as "The Now", and in fact released a single 45 under that moniker on a tiny label out of Hollywood. The A-side of this disc is especially killer, and certainly rivals their later recordings, even as a garage-y band in-development.It's a pity that there are not more recordings of the band from this era. (There was also an even earlier 45 on the Brent label, released by an earlier incarnation of the band known as "The Ban". This is not something that I have found yet, so the search continues...)

Many thanks to C.F. for loaning out this 45 from his archives! 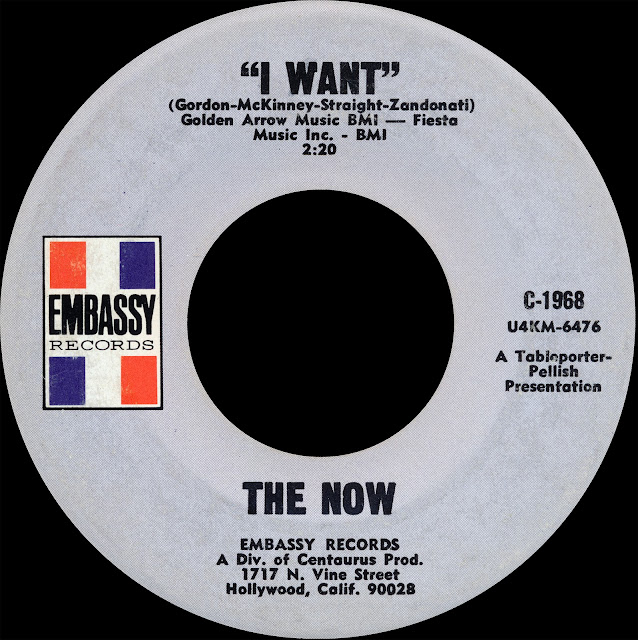 The B-side is also available on YouTube here: https://www.youtube.com/watch?v=T6T0A4IXFw4
Thanks for taking the time to read my posts and check out my blog. I'd greatly appreciate it if you leave a small comment below. Notes from my readers are what inspire me to keep going. Thanks!
MEGA: https://mega.nz/folder/E0hiEDwT#HthJM6TsT0tpbAeH66gHMg

Posted by ThePoodleBites at 10:09 AM

I have been working in vinyl restoration for many years. I have done it for the love of music, not for the love of money. I have submitted masters to record labels and released digitizations that reveal the limitations of other labels' (and engineers') products. If you have a piece of vintage audio that you would like digitized, don't trust a company that could care less about their end product than they could about the recording itself. Please contact me I will happily
and freely transfer any rare recordings for you. Alternatively, see the "FAQ" post here for my want list for albums I am willing to purchase and rip to share here for all. There is too much great unheard music out there to let it suffer at the hand of careless individuals with only a dollar in mind.
For those with such inquiries, you can contact me via email: thepoodlebites561 (at) gmail. Thanks, and enjoy the music!