This is one of several releases by a San Francisco, California band known as Tripsichord Music Box, or Tripsichord, and the first of several records that I plan to post on this blog by that group. These guys were one of a handful of bands to secure major label distribution after working under producer Matthew Katz, the others including Moby Grape, Jefferson Airplane, and It's A Beautiful Day. They also previously had three tracks on the Fifth Pipe Dream compilation, released 1968, which are some of the best songs on that entire LP. For some reason Tripsichord never reached the same popular highs as their peers, though for me their music is some of the best from the aforementioned acts: and for those of us who deeply love the '60s SF music scene, that's no minor statement.

Major thanks to C.F. for loaning out a stunningly pristine promo copy of this rare 45; for his dedicated
research; and for his (perhaps endless) altruistic contributions in even the most obscure ways! 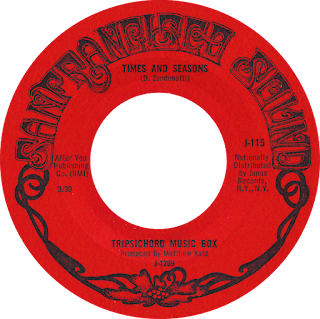 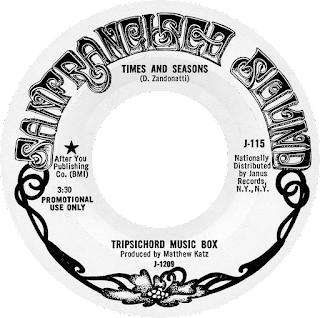 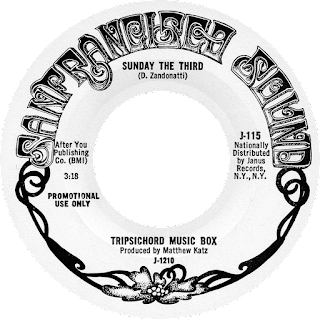 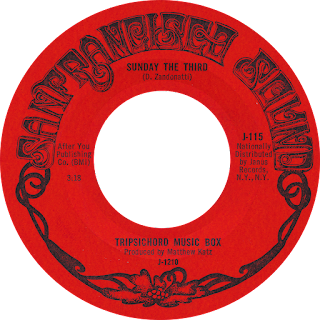 The recordings on this 45 were completed in late 1969, after their album had already been tracked. However, these songs were actually released first, and not until around February or March of 1970. Both the promo and stock copies (labels of both pictured above) were manufactured by Monarch in L.A. and pressed with styrene instead of vinyl, which makes finding a flawless player copy quite challenging. I had somewhat resigned to the idea that every copy around may have suffered from the typical groove damage until I received this seemingly unplayed WLP from CF.

These tracks have been released on the Akarma reissue of the Tripsichord album, with the usual Akarma "remastering." For those who don't know, Akarma is an Italian bootleg label who likes to masquerade as being legit, so their releases are usually either done from needledrops or from someone else's digital transfer. In this case, the 45 dubs on their set suffer from channel issues and noise reduction. The restorations I present here are a major improvement in sound quality upon all other digital versions.

B-side is on YouTube here: https://www.youtube.com/watch?v=-Nd6Y1PjlkM
Thanks for taking the time to read my posts and check out my blog. I'd greatly appreciate it if you leave a small comment below. Notes from my readers are what inspire me to keep going. Thanks!
MEGA: https://mega.nz/folder/vNtSyJTK#nR650qwADBjZCmKr8mdiPA
Enjoy!  :)
Posted by ThePoodleBites at 10:35 AM