The Spike-Drivers, a group originally from Detroit, Michigan, have deservedly acquired somewhat of a following around their few mysterious singles. RD Records writes that "[t]hey came as close to making it as possible and still failed," which after reading their story seems to be a fitting summation. The band boasted several members ("not rock stars, just minor asteroids") which would go on to be in acts such as The Perth County Conspiracy, Modality Stew, and the Peace, Bread, & Land Band. The Spike-Drivers, however, have a much more raw, dosed-garagey tinge which itches that itch for lovers of vintage '60s sweat & fuzz. This 45 on the private OM label was reportedly the band's (err, at least Sid Brown's) favorite of their commercial releases, since it wasn't plagued by the over-production which the band was pressured into by their major-label cohort. The restoration presented here is a drastic improvement over any existing digital version of this original mono mix.

Many thanks to my friends C.F. and STS for loaning out their M- copies of this 45! 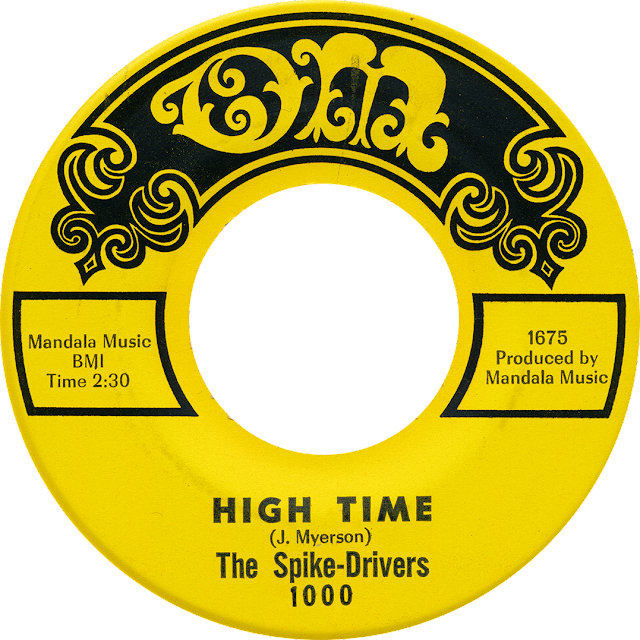 This was the band's debut 45, which helped secure them a manager and a move to New York City. This would later be followed by, after turning down a "dream contract" with Atlantic Records, a deal with Reprise Records. The CD release has wonderful liner notes written by Sid Brown; I'll share one relevant paragraph from those liner notes here:
"Two big fans of ours, Jackie and More Fagenson (owners of Faygo soda pop) donated money for The Spike-Drivers to record. I can't remember how we ended up picking Chess Studios in Chicago to do our session. I believe it was the fact that Chess was an eight-track studio and no such advanced facility existed in Detroit. In any event, we did our middle of the night recordings right after Chuck Berry and Bo Diddley had done a session. The "vibes" felt very powerful there. We recorded High Time – ostensibly our hit single and Ted's raga-rocking Often I Wonder – at the time the longest (5:49) single ever recorded. A representative of a big-time manager, Leonard Stogel, attended the Chess session. On the basis of his rep's glowing recommendation, Stogel flew into Detroit to negotiate a personal management contract with us. Mort and Jackie persuasively suggested we get a really good lawyer to look out for our interests and referred us to Gill Frimet. As a result of Gill's expertise and genuine interest in us as certifiably naïve navigators in the shark-infested seas of show biz, we signed perhaps the fairest musician/manager contract ever. His inclusion of a fiduciary clause in the contract save the band from owing a fortune to the record company and the manager when the deal went sour."
C.F. was the first person to turn me on to this band, and this post was by his request; but this private release – like many others – has variable vinyl quality. Luckily STS reached out and offered to loan his copy of this 45 (along with others; stay tuned!), which is a very clean player. The RD Records reissue includes both of these tracks from tape, but they appear to be remixes with lots of added reverb and digital processing (adaptive NR?). While not a bad remix, I still think the sound of the original 45 will remain preferable for many.
Track listing:
1) "High Time" -- 2:35
2) "Often I Wonder" -- 5:48
Dynamic Range: DR11
Vinyl condition: M-
Equipment Lineage:
– Audio-Technica VMN40ML stylus on AT150MLx dual moving-magnet cartridge
– Audio-Technica AT-LP1240-USB direct drive professional turntable (internal stock preamp/ADC removed)
– Pro-Ject Phono Box S2 Ultra preamp with dedicated Zero Zone linear power supply
– Focusrite Scarlett 6i6 MkII (96kHz / 24bit)
– Adobe Audition CC 2020 (recording)
– iZotope RX 7 audio editor (manual declicking, EQ subtraction, additional adjustments)
– Audacity 2.3.3 (fades between tracks, split tracks)
– Foobar2000 v1.5.1 (tagging, dynamic range analysis)
Flip side also on YouTube here: https://www.youtube.com/watch?v=WwFHeR20huY
Thanks for taking the time to read my posts and check out my blog. I'd greatly appreciate it if you leave a small comment below. Notes from my readers are what inspire me to keep going. Thanks!
MEGA: https://mega.nz/folder/Qp5wHSSa#aHgSsdPOyZ96gwqL1KXA-Q
Enjoy, and happy high times  :)

Posted by ThePoodleBites at 10:50 PM

Email ThisBlogThis!Share to TwitterShare to FacebookShare to Pinterest
Labels: Spike-Drivers