Tripsichord Music Box - "Fly Baby" b/w "We Have Passed Away"

When I first heard "Fly Baby," all the hype about this band finally started to make sense. After repeated listening I realized that song is simply one the best San Francisco psychedelic-sounding masterworks ever recorded. Everything about it oozes eerie midnight trips, the heightened fluid lead of Frank Straight jazzing out before the band suddenly bursts into harmonic overdrive, 3-part vocals pleading to "flyyy... fly with me baaeee-beeee..." -- wow!

This Tripsichord 45 was probably released contemporaneously with their demo album on the red San Francisco Sound label, which has been dated to circa November or December 1970. Unlike the band's first single, both of these tracks appeared on their full-length album, but "Fly Baby" was truncated to less than half of its original length, omitting the long guitar solo and final verse. The B-side sounds identical to the red-label demo LP to me, but I guess there will be people who argue this is superior sonically, having been cut at 45 RPM rather than 33⅓. This 45 has never been reissued or ripped elsewhere, so both sides make their digital debut here.

Major thanks again to C.F. for lending out this treasure from his never-ending archives! 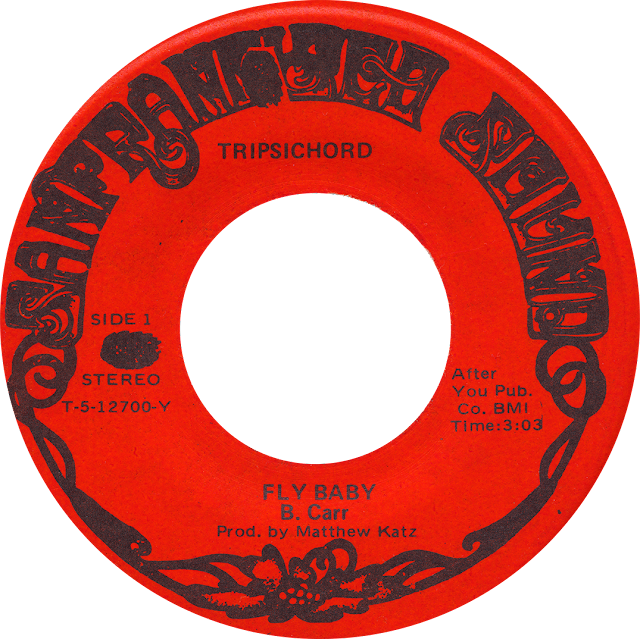 Although the lyrics are pretty easy to hear, and even though they unambiguously define the B-side title as "We Have Passed Away," somehow that song was mistitled on the labels as "She Has Passed Away." This was corrected in 1971 for the Janus release and for all future reissues, but it surely makes one wonder what Katz was listening to these recordings on back in those days...

Unlike the first single, this was a New York affair, and it was pressed on vinyl, which bodes very well for the sound quality. Those who have never heard the red-label SF Sound pressing of the Tripsichord album (which is probably pretty much everyone reading this post) will note that the sound quality here is far better than on the Janus LP or any of the subsequent reissues: vinyl, CD, or otherwise. More on that later...

The unedited B-side is on YouTube here: https://www.youtube.com/watch?v=DAK5Wx7PKDI
Thanks for taking the time to read my posts and check out my blog. I'd greatly appreciate it if you leave a small comment below. Notes from my readers are what inspire me to keep going. Thanks!
MEGA: https://mega.nz/folder/XIMniQaa#l4Vu9epfl14JLy1c9jl4WA

Posted by ThePoodleBites at 11:29 PM