Bobb Trimble - Life Beyond The Doghouse

In 1982, with two totally unrecognized psychedelic masterpieces under his belt, and after his previous "Kidds" band had been dismantled by suspicious parents, 24-year-old Bobb Trimble decided to join up with some marginally older junior-high students to form The Crippled Dog Band, apparently a name inspired by a local 3-legged dog they lovingly called Boopsie. The band made an album's worth of recordings but soon fell apart, and in 1984, deciding it was best to just forget the whole thing, Bobb disposed of an entire 500 pressing run he had made of Crippled Dog LPs into a dumpster. Fast forward twenty years and Bobb is an underground indie psych legend, and with a reissue extant of his first two records' material on Parallel World, Bobb decided it was time to let some unreleased material out of the vaults. Thus Life Beyond The Doghouse was born, released on the Danish label Orpheus Records in 2002. 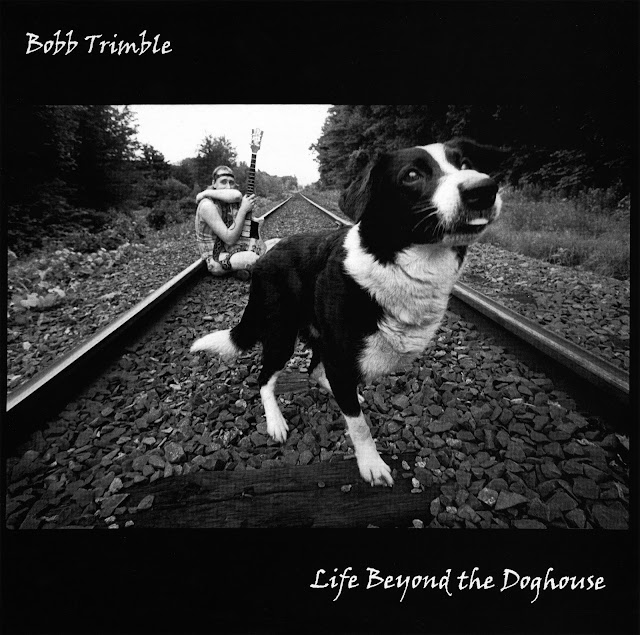 The change of band also corresponded to a change of sound, and while these recordings are still unquestionably in Bobb's unique style, they feature more influences from the '80s "new wave" of rock 'n' roll than from the introspective psychedelia which this reviewer prefers. Others' opinions may differ; Bobb himself apparently called the group's style "high-energy psychedelia... a cerebral kind of band." There are definitely a few tracks which shine, and one ("Deep Inside My Heart") that could've even fit in on Harvest Of Dreams, but there are also some songs which I'll probably have no desire to hear again. The decent "Blood Of The Lamb" (featuring The Violent Reactions) shows Bobb revealing some newfound Christian influences, and has a fuzzy overdub which sounds experimental enough to be inviting. The three central tracks on the B-side are entertaining, with phased guitars and sound effects such as shrieks, claps, trains, and talking, and all appear to be studio tracks with enough reverb added on the (modern) mix that they sound like they're live in a small auditorium.

The pressing leaves some sound quality to be desired; while actually surprisingly quiet, it has some issue similar to other modern pressings where natural musical sibilances are heavily distorted. "Camel Song," in fact, is so distorted that it is barely listenable. These distortions are on the vinyl itself and are not from my transfer.

Overall I'd say this feels like a nice collection of demos/outtakes for Bobb enthusaists that is pretty much non-essential for anyone who isn't already in love with his two real gems, Harvest Of Dreams and Iron Curtain Innocence. For those who like the Crippled Dog Band material, another album exists (and can be easily found on LP or CD) simply called The Crippled Dog Band, featuring more of the band's original 1983/84 recordings.

Thanks for taking the time to read my posts and check out my blog. I'd greatly appreciate it if you leave a small comment below. Notes from my readers are what inspire me to keep going. Thanks!
Google Drive: https://drive.google.com/drive/folders/1nplnv1kAzXeSlYVzIFLlMvJC3A94TR1q?usp=sharing
Enjoy! :)

Posted by ThePoodleBites at 12:49 AM