The origins of hard rock / heavy metal music, along with Black Sabbath and the Vanilla Fudge, is deeply linked to the legendary music of Steppenwolf. While probably best remembered today for their Easy Rider hits "Born To Be Wild" and "The Pusher," I'd argue the best moment on their debut is actually "The Ostrich," which boasts more poignant lyrics than most bands accomplish in their entire careers. Some tracks are perhaps disposable but the album is certainly more often great than mediocre. After being surprised with massive success the band would prolifically produce albums for ABC/Dunhill surmounting in what would many consider their best record, Steppenwolf 7, only 2 years later!

For this debut I've ripped 3 original US mono copies of this album (two of which were only mono on one side), and I can confirm with some certainty that these copies sound very much like a re-equalized stereo fold-down. However, this recent Sundazed release shows that the album was mixed in mono at some point in time, but whether or not it was released in 1968 remains definitively unproven. Whatever the history, this mix is 100% worth hearing. I've included a 44.1kHz / 16bit downsample of this one as it appears to have been cut from CD-quality source material.

Thanks to my buddy Aaron R. for making me aware of this reissue so that I
could purchase, rip, & share it for all! 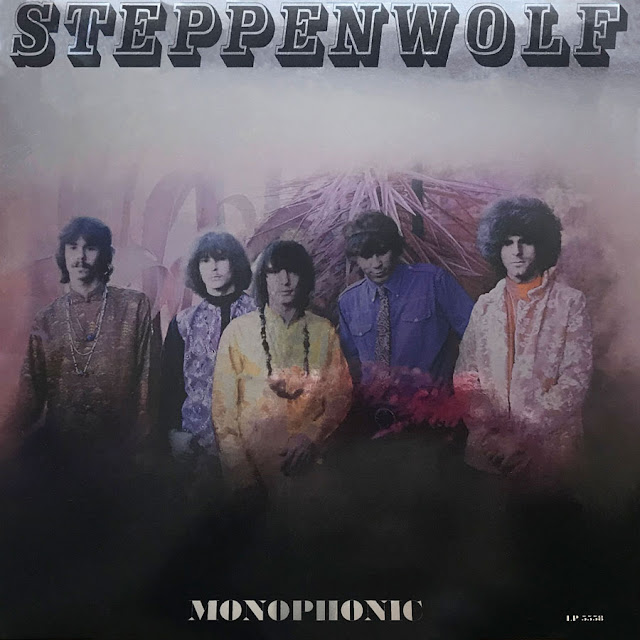 I've found it impossible to scan the foil cover, so I've robbed this photograph from the Sundazed website. 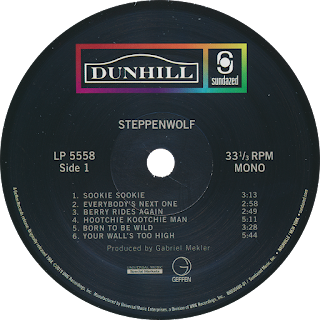 For the record, Sundazed's engineer boldly makes some claims about this mix on their website, some of which are untrue, so be forewarned that there still are all the guitars in "The Ostrich" and you'll also find double-tracked vocals on your stereo mix of "A Girl I Knew." How a professional engineer in a high-end studio could make these blunders is beyond me... but there's one other mastering mistake here, and that's that it appears whoever transferred the tape did so with a stereo tape head and then folded to mono, not realizing that the channels were slightly out of phase when doing so, thus leading to some spectral cancellations in the high frequencies. Whooops! But, we're stuck with this as it's the only confirmed source for this mix, and damn does it still sound good. I'd venture as far as to say that "The Pusher" must be heard in mono to hear in its definitive form! 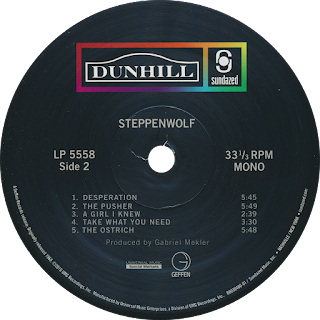 It's also worth mentioning that these mixes are quite different than the single versions, which have all been conveniently compiled in great sound quality on the Real Gone retrospective set. So, for some of these tracks, at least 3 period mixes are known to exist! Boy are we lucky... :)


Google Drive: https://drive.google.com/open?id=1tHQGCS8AQWNWOfe8F8nkRw3wRo9eav_Z
Enjoy, and please leave comments below. Merry Christmas to all!
Posted by ThePoodleBites at 9:27 PM

Email ThisBlogThis!Share to TwitterShare to FacebookShare to Pinterest
Labels: Steppenwolf

You may donate to the UPVHQ via the button above. Funds will be used for procuring additional analog audio to restore, remaster, & liberate to the world, for free, forever.