Shadrack, a psych-rock act out of Iowa, is widely known among serious collectors of private press records for the album Chameleon, which is quite a high-dollar item. Anyone will tell you that Steve Fox was the main creative force behind Shadrack, but this single apparently had a bit more group involvement than the later recordings. This was supposedly recorded about 18 months before Chameleon, but was discovered by collectors some time after its long-playing brother was known to exist.

I've been hoping to run into a copy of this single for a long time, but none ever popped up for sale. So, my friend C.F. offered to loan me his copy for a proper transfer and restoration project. Thus we all have him to thank for this! 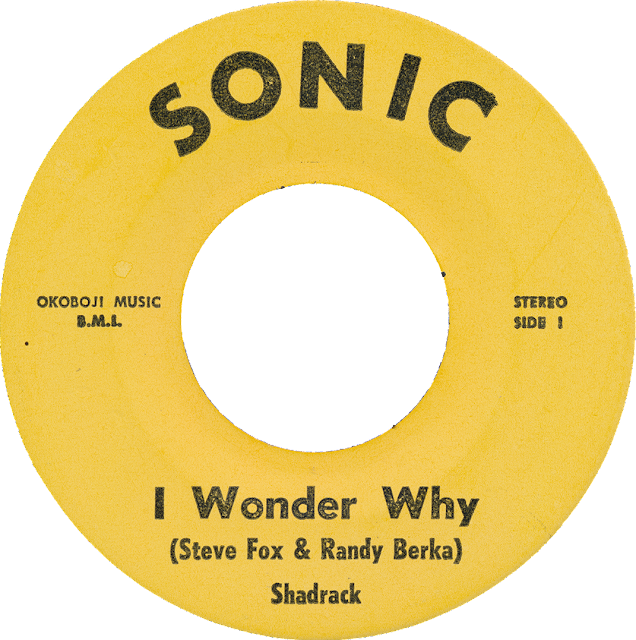 Unlike the Shadrack Chameleon album, this single was recorded in a professional studio, and apart from the shrill vocals on side 2 (it's in the mix) and somewhat noisy pressing, it actually sounds really good. This has only ever been reissued on Gear Fab with their usual noise reduction and bad EQ, which this blows away. I've done my best to clean up the inherent groove noise without doing any damage to the audio, but you may hear a bit of noise in the intro/outro of the tracks, and a noticeable bit of distortion from those vocals on side 2. This record also had a severe edge warp which required me to record and slower speeds and do speed & EQ correction in the digital domain. This has of course been done with the utmost care so that you can hear these recordings as they were meant to sound.

Email ThisBlogThis!Share to TwitterShare to FacebookShare to Pinterest
Labels: Shadrack