Here is a primo mastering of Country Joe & The Fish's best album. The fact that the band was able to release this masterpiece within the same year as Electric Music is quite astounding and speaks to the band's mastery of their craft. I've been wanting to do this LP for years (looking at my HDD now, it's been over 5 years since I did my first raw transfer of this album), but I wanted to ensure that my mastering would beat all digital versions of this album currently available, including all other rips and the CD remasters. The early CD version is really bad, way too loud (and some claim the wrong mix), and while the 2013 is a bit quieter, it's still very compressed / limited and the tape has numerous dropouts / problems that are apparent throughout the album. Since the incredible dynamics of this LP are certainly unparalleled by any rock album of its time, the numerous quiet sections throughout the LP are notorious for noise even on the cleanest copies. For this rip, I opened a vintage copy that had remained sealed for over 50 years before reaching my hands. Finding this was not easy, and I still feel bad for opening it, but this rip was certainly worth it. 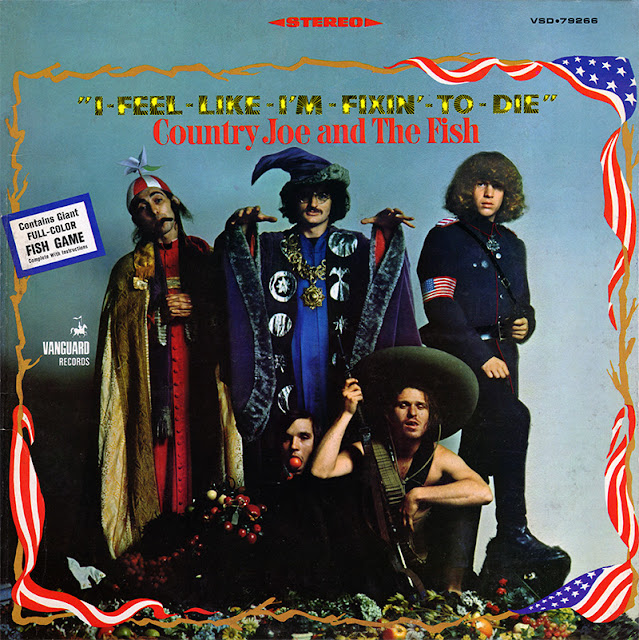 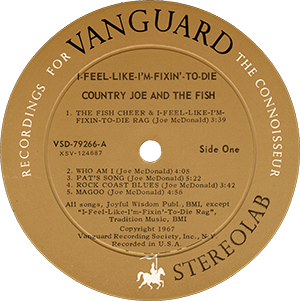 This album has a very special meaning to me, as it was the first psychedelic rock LP that I owned, and when I finally got that first copy, it was in nearly constant rotation on my turntable. I knew the title track from the infamous Woodstock performance, and I remember crawling around the house as a young kiddo singing that song before I could even understand what the words meant. But what's amazing here, is that immediately after perhaps the ultimate protest song of the 1960s, with its tongue-in-cheek tone and ironic juxtaposition of psychedelic ragtime with machine guns, Country Joe & The Fish manages to maintain their audience. This is certainly the furthest from a one-hit album as any of the great '60s masterpieces.

Instead of continuing their political critiques, which the band was able to pull off stunningly well, the second track "Who Am I" is in every way the antithesis of the first. While the "I-Feel-Like-I'm-Fixin'-To-Die Rag" presents a very critical view of external negativity, "Who Am I" drastically changes tone into a quiet self-reflection which is in every way as scathing as the opener. The solemn statements and sheer honesty of Country Joe's words present his feelings as both genuine and relatable, which come as a complete shell shock after the bombastic opener. This amazing juxtaposition while maintaining meaningful continuity is something that the band would have on no other album.

Following this is the most beautiful "Pat's Song," where we see two motifs for the first time: the first is of the band's affinity for fixing compositions to particular individuals, and the second is of color. There are certainly many colors here, from a heavily distorted guitar giving way to a mesmerizing bell solo, again flaunting the band's ability to maintain musicality while traversing incredible dynamical landscapes.

If nothing else, "Rock Coast Blues" extends the vivid color of the San Francisco coast while exemplifying the band's ability for extremely tight performances. The following "Magoo" which ends side 1 is a perfect track in every way -- the band incorporates the sound of thunderstorms which emphasis the dramatic cymbal rolls and melodic guitars, then suddenly Joe's voice explodes and echos across the sky -- a most incredible, ripping, deeply spiritual song, matching again the level of "Who Am I" but this time Joe talks in a second-person perspective to his audience, undeniably rare in rock music. The song builds to a startling crescendo, echoing "life before death" and "stay as you are," and just when you think it's time to get up and flip the album, the band surprises you -- there's more! An extremely and purposefully contemplative guitar trio again builds with the band to a crescendo which suddenly ends not in the darkness of before but on a somewhat more mysterious note. 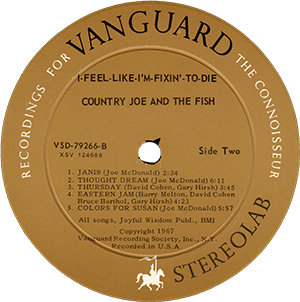 Upon flipping the album side, it becomes clear that the band learned from Shakespeare that you can't be so serious for long -- and indeed, if the existential beauty that ends the first part of the album had immediately continued, it may have felt as if the band was trying too hard. Not the case! Here, McDonald again finds a new mood to swing into, with a love song written to his ex-lover Janis Joplin. "Into my life on waves of electrical sound," and you can immediately feel the electrical waves flowing through the Fish's music and feel the intensity of McDonald's emotions. "Janis" epitomizes the purity which most love songs lack, but if you listen closely, you may be surprised that it's not as happy as it first seems.

After taking an entire album side worth of music's break from satire, the band comes in with "The Bomb Song" as the introduction to the much deeper-rooted "Thought Dream" -- here again the band demonstrates that while they are capable of heavy criticism, their propensity for meaningful sound is just as strong. After a reprise of the H-bomb "prayer," the band sings a radio ad-style ode to LSD. This is where the difference between the band's first album, Electric Music, and this sophomore work becomes most obvious to me. While the first record gives a wink and a whisper, here the band has lost their fears and anxieties and clearly embraced their audience, which leads both to something more brutal (as with the title track) but more honest, and thus more timeless. "The Acid Commercial" has been the first track on my 12-hour playlist ever since I first made it.

"Thursday" is next, which is the last vocal song on the album; it's a love song that is perhaps a remembrance of "Janis" but is more likely meant to show the concept of forward motion through time and the evolution of personal state through the apparent relationship contrast. After a final word, the band manages to find an influence they still haven't cited in their dictionary and goes into "Eastern Jam," which is exactly as it says, a jam over a simple I / bVII chord progression, which is surprisingly the furthest thing from boring, as the band maintains the concept of motion while growing to an unknown goal, but for some reason steps out of the way for what will be the album's closer.

The album ends with "Colors For Susan," another contemplative instrumental which brings back the motif of color and here combines it with a wide range of chordal resolutions in various unpredictable fashions. This track to me has always seemed like ascension -- after travelling through the diverse hardships the band creates, they end it with a final coda, and it brings a resolution to the LP that probably would be least expected naively listening to the record's first track.

I believe this album is a true masterpiece of the genre, one of the undisputed classics, and if you can take the time out of your day to sit down, listen and make it all the way through, I have no doubts that you will likely agree.

Vinyl Condition: Mint (vintage sealed copy)
**Note: scans are from my backup copy since I didn't feel like removing the shrink on my new copy. I also have not scanned the gigantic Fish Game (wow! I still need to play this), but you should be able to find it elsewhere, whereas this sound quality is only available here ;)

***Also, I included a (basically) raw rip of my "old" (backup) copy, you can disregard / delete this if uninterested in crackly vinyl.

Google Drive: https://drive.google.com/drive/folders/1u3hwkOEo75t1pI7FOhDKCxmDGQiwOAN4?usp=sharing
Enjoy, and please leave a note of thanks below so that I know my work is not in vain! :)

Posted by ThePoodleBites at 1:27 AM

Email ThisBlogThis!Share to TwitterShare to FacebookShare to Pinterest
Labels: Country Joe & The Fish