Original German Pressing
Liberty LBS 83 306 I  (Discogs)
~ThePoodleBites rip in 96kHz / 24bit FLAC + full high-res scans!~
Though the average foreigner may suppose that everyone in Switzerland is still dancing to the accordion and yodeling off mountaintops, it turns out that the central European country had some pretty hip bands even way back in the 1960s/70s, which are worth exploring to psych-heads as much as the Alps are to adventurous sportsmen. In such an endeavor into Swiss rock, there's no better place to start than the first Krokodil LP. Though the band was/is based in the Schweizerdeutsch-speaking city of Zürich, Krokodil's early records are entirely in English, which will certainly appeal to the monolinguists amongst us. "Krautrock" seems to be the genre most attributed to Krokodil, though their style is clearly distinct from the usual sauerkulprits of Can, Amon Düül, Agitation Free, etc. While the later LPs voyaged deeper into heavy prog territory, this debut is firmly rooted in blues-rock, and with the aid of significant Eastern influence the sound is not unlike Kaleidoscope (US) or maybe even J.K. & Co.
Major thanks to the record phantom C.F. for sharing his Krokodil LPs in the name of blogdom! 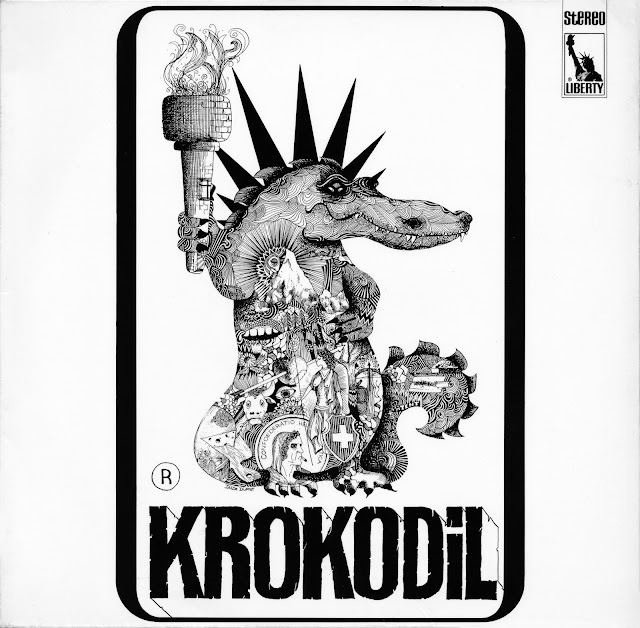 What a front cover. Drummer Düde Dürst (ex-Les Sauterelles) discusses his artwork in this phenomenal interview with Klemen Breznikar of It's Psychedelic Baby Magazine:
Sigi E. Loch knew that I had already designed many LP covers and posters for various bands. He ordered me to draw something. My idea was to make the Liberty logo as a crocodile. My illustration was enthusiastically accepted and printed by the record label. The US record company did not want this cover, on the grounds that their logo should not be defaced. We insisted on our version, which then led to the rejection of production. Various US stores have then simply imported the LP.
The design is undeniably a twisted Swiss production, with half-naked Helvetia holding the Swiss coat of arms, as her stoned counterpart on the Confoederatio Helvetica coin (drawn to look like Dürst himself) smokes a joint; an open wheel of Emmental rests on a cutting board near an aroused Holstein; with the collage topped by an Alpine peak in front of the westward setting sun. Wow. The design is reflected on the back cover, along with the usual listing of tracks and credits, also drawn by Dürst himself. 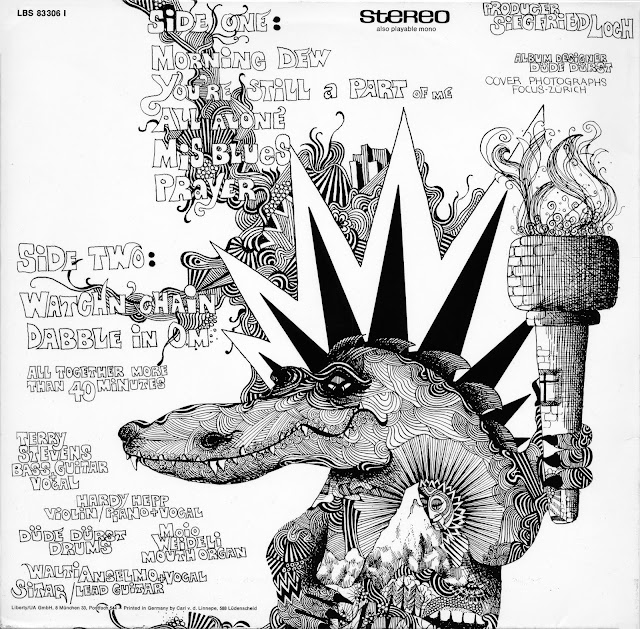 As you may have guessed, Krokodil (pronounced like "kroh-koh-deal") translates to "crocodile" in English, though the word has also been used regularly in "street" terms to refer to the opiate desomorphine, manufactured by the Swiss healthcare company Roche. Whatever the meaning, it is clear that Krokodil's sound had no small influence form the stoned-out '60s sounds of bands like the Grateful Dead and Iron Butterfly. The striking Bonnie Dobson tune "Morning Dew" -- which many will know from the Dead's or West Coast Pop Art's debut LPs -- opens this album, and is immediately followed by one of the band's best tracks, "You're Still A Part Of Me." Other highlights are "Prayer" and "Dabble In Om," with the latter having an Arabic-influenced intro of misshapen oboe figures over a resonant middle-eastern drone. It's closer to Yusef Lateef than anything I've ever heard in psych music before, and the following 10-minute trip is an adventure across equally stunning architecture.
The third Krokodil LP is apparently the one which has really become a cult item, but this debut is perhaps currently still the favorite for me. There's not one boring moment on this record, even if the straight-ahead riffage / 'telephone call' on "Mis Blues" isn't the mind-blasting apocalypse of its neighbors.


This record, along with the later Krokodil LPs, has been reissued from the master tapes on CD via the Second Battle label circa 1999. Unfortunately, though, the mastering was ruined by heavy-handed EQ along with digital compression and limiting. The result is that over 50 years later the extremely well-pressed original LPs (which were manufactured a tad north of CH in Munich, Bavaria) are still superior in fidelity to anything that came after. Thus I have manually restored this high-resolution transfer for your enjoyment, which turned out to be barely any work at all, given how well C.F.'s copy performed. Stay tuned; there is much more to come. 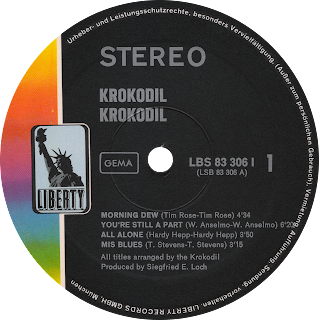 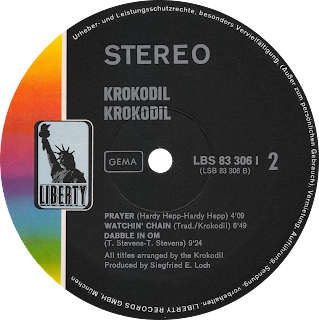 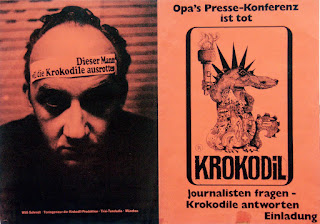 Email ThisBlogThis!Share to TwitterShare to FacebookShare to Pinterest
Labels: Krokodil