Mother Tucker's Yellow Duck is a well-known Canadian psychedelic group who managed to release two solid albums on Capitol Records in '68-'69. Before both of those records, though, the band had a little-known non-LP single, which is presented here digitally for the first time. This single was originally released on London Records and TCP Records (distributed by London) in 1968. While technically on a major label, obviously not many copies were produced, as by 1969 the band had re-recorded both sides in glorious stereo for reissue on their own Duck Records label. The earlier 1968 first version (in mono) is the more raw recording of the two. To my ears there are strong California vibes here, bringing in a rural wave a la early Jefferson Airplane or The Byrds. Nevertheless both sides are worth enjoying & be sure to check out their full-length records if you haven't already been turned on to them.

Thanks to C.F. for his major contributions: both for lending out these 45s and
for the help with research! 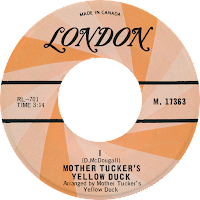 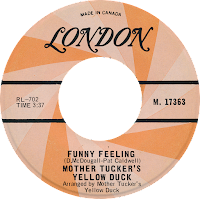 Both the orange-label London release (likely a promotional variant of the stock blue-label version, which also exists) and the TCP version were made with identical stampers. I've included raw transfers from both as usual, and ended up using whichever one played cleaner for the final restoration. Scans of the labels from both variants are included as well. 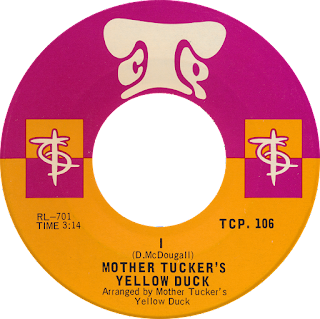 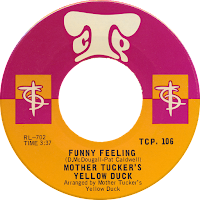 Enjoy, & feel free to leave a comment below! :)
Posted by ThePoodleBites at 7:04 PM