After being bamboozled by a counterfeit and thus having to sort out The Acid Archives errors with the help of Josh R., I'm happy to present a pristine restoration of this Texan blues-psych cruiser from an immensely rare original pressing. I first heard Corpus 5 or 6 years ago via "Marriage," whose guitar line immediately hooked this album into my top wants. After years of waiting, I found a beautiful copy that plays clean and was a fantastic source for this project.

Thanks to Josh for another amazing write-up below!

When it comes to my favorite early 1970s bluesy psychedelic rock, it doesn't seem to get much better than Corpus's "Creation A Child," a self-released record out of (you guessed it) Corpus Christi, Texas. From the moment I heard this LP I was immediately captivated by the soulful, screaming lead guitar which jolts the album with pure electricity. I'd really not heard such commanding guitar on a private press album, which drew me in from the very first listen – this is no one-man guitar hero show LP, this is a full band work with the guitar accenting the songs, yet ends up stealing the show more than once.

Blasting out of the gate we have "Cruising," and if there ever was a driving-fast-in-your-Camero in the 70s song, this is it. With (supposedly true) lyrics about picking up hitchhikers and getting stoned (and even sleeping with them!) the vibe of the album starts off in full party mode, with bluesy riffing and lead guitar.

The multi tracked guitar on this album is stellar and professional, with William Grate's black Les Paul dominating the sound, and they achieved great results in the 8-track studio where they recorded it, quite surprising for a local release. Looking at photos, it seems Grate played through a Traynor amplifier, while James Castillo played through a Sunn and Kustom amp with a Fender bass. Rhythm guitarist Richard DeLeon played a red Gibson SG with P-90s through an Acoustic amplifier.

But it is "Joy" where the moody, dreamy tone sets in, with aching lead guitar that invokes a midnight vibe few albums can muster. It may come as a surprise to listeners of this album that the band consisted of teenagers - the swagger and confidence indicates a group much older and wiser. Mature lyrics about marriage are unusual for a group this young, and indeed they had a lyricist penning the words to the tunes. Going into "Marriage" we have a twin-lead guitar riff rocker with realistic view of the union of two partners yet also ponders the yearning for a woman with no strings attached.

The closing song of Side A, "Creation A Child" is a slow-burning psych delight with a loping, mellow guitar riff until about halfway through, when they kick things up a notch into a total scorching rocker.

Side B opens with a pair of boogie rockers - "Just A Man" features roadhouse dual overdubbed smoking guitar leads and continues the themes of man and woman as well as "We Can Make It, Luv." One can imagine "Just A Man" or "Cruising" made nice live show openers for their presumably hot live shows. "Not Mine" is a softer downer track that is a bit of a break from the boogie rockers [tpb: and sounds great with a few tokes of your favorite tea!].

"Where Is She" is a more generic blues rocker, and feels like a bit of a filler track, but soon we are lifted by the masterful closer "Mythical Dream.” One of the highlights of the album to me, an absolutely dreamy loping soft psych cut with lyrics inspired by the Greek gods and goddesses. Slow, stoned and haunting, the slight vibrato warbles of the lead guitarist are entrancing and show Corpus were just as good at going for slower moody ballads as they were doing their quick boogie-best rockers.

Not much is known about what became of Corpus, as this was their only vinyl offering. There has been some confusion about the release date, and the years 1970-1972 have been stated. However, the Houston Records numbers where the album was pressed clearly point to 1973 (which I trust more than hazy memory.) They didn't last much longer, due to drugs and personal issues, as is the case with so many of these hometown bands that were lucky enough to cut a record back in the day. It's difficult for me to encapsulate why I enjoy Creation A Child so much, but I believe the vibe, stellar lead playing and recording quality and confidence make it close to, if not a Top 10 private press favorite for me, and is the type of album people will easily pay $100+ for a bootleg copy. Although they were planning a 2nd LP, it never materialized, but at least they left us with this incredible piece of wax wrapped in a spooky hand-drawn cover. [JR] 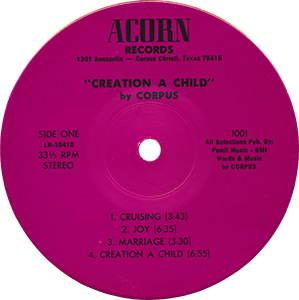 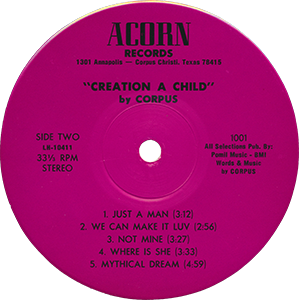 Unfortunately while my Corpus disc is very clean (as you are about to hear), the cover has some ring wear from bouncing around in a box for decades. My old pink-label bootleg LP had no such wear, so I've included scans of that copy as well for ultimate completists, although most will probably find this addition unnecessary and redundant.

Enjoy, and please feel free to leave a comment below! 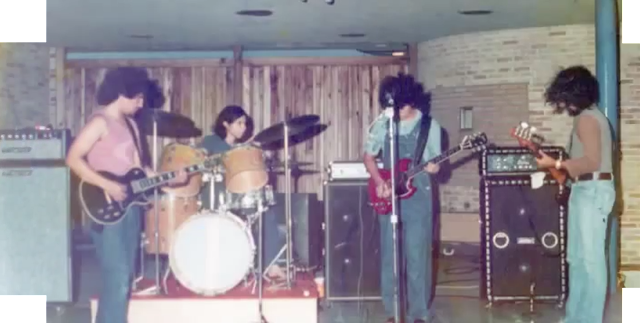 Posted by ThePoodleBites at 10:55 AM

Email ThisBlogThis!Share to TwitterShare to FacebookShare to Pinterest
Labels: Corpus